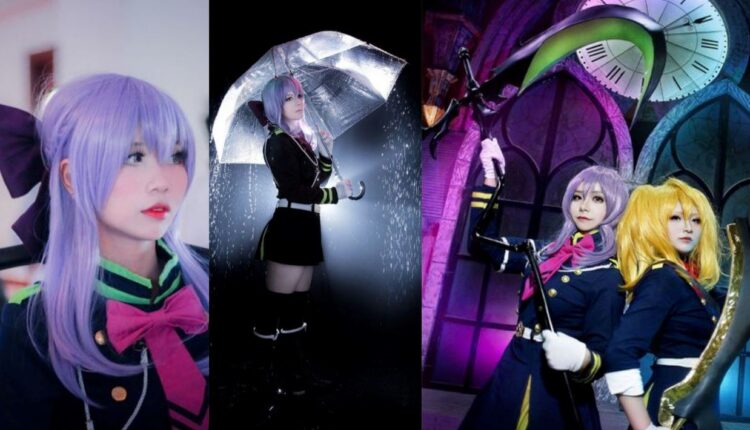 If you want to know what are the 20 best Shinoa Hiiragi Cosplay From Owari no Seraph, now you have landed in the right place, my friend. Shinoa Hiiragi is a cute female character from one of the most popular action-packed dark fantasy and science fiction anime series named Owari no Seraph, or you might also call Seraph of the End, as its official English title. Although Shinoa has a little bit less screen time in the main anime, her cute moments throughout the series were enough to win millions of hearts of fans throughout the world.

Shinoa Hiiragi was predominantly featured in the manga series Seraph of the End: Vampire Reign. In addition to this, we also got to witness her in the prequel of the main story of Owari no Seraph, which is known by the name Seraph of the End: Guren Ichinose: Catastrophe at Sixteen, in the night novel series, and which got manga adaptation later. Let us quickly examine the character analysis of our cute little Shinoa Hīragi.

Shinoa Hīragi is from the most powerful clan in Japan. Her family members are also the ones who are currently ruling the Japanese Imperial Demon Army, the Hiragi Family. Her family deals with different instances and matters mostly related to supernatural things. As most of the members of the Hiragi Family or Hiragi Clan are powerful magic users and strong fighters with tough and sharp skills, they have managed to control the Japanese Imperial Demon Army.

The Japanese Imperial Demon Army appointed Shinoa Hīragi to be the supervisor of our protagonist, Yuichiro Hayakuya when he was under suspension period. Other than working as a  sergeant for the Japanese Imperial Demon Army, Shinoa is also a leader of the Shinoa Squad in the Moon Demon Company, which is known for its expertise in Vampire Extermination.

Although Shinoa Hiiragi had less screen time in the main story, the cute and adorable things she does and the way she teases everyone around her, especially the ones she had acquainted with, Mitsuba and Yu, attract the fans of Owari no Seraph, and forced them to cosplay this beautiful and kawaii character. Here are the 20 Best Shinoa Hiiragi Cosplay From Owari no Seraph, after seeing which your mouth will involuntarily roll to say “Kawaii.”

Quỳnh Trang is a famous cosplayer from a country known for its beautiful beaches, Viet Nam. In addition to the Shinoa Hiiragi, she also cosplayed different cute characters from the anime, including Rem from the Re: ZERO -Starting Life in Another World, Hanayo Koizumi from Love Live School Idol Project, and Kijyo Momiji from Onmyoji Mobile Games. Her makeup style and detailing she presented through her Hinoa Hiiragi cosplay truly left the fans of Owari no Seraph speechless.

Arianna is a cosplayer from Rome, Italy. She usually does cosplay along with her friend and lover Daniele, who is originally from Chicago, United States, and they together call Us to cosplay. They have more than five thousand followers on their social media pages. You can check more of their cosplay on their official Facebook page, which includes Asuna & Kirito from Sword Art Online, Elizabeth Liones from The Seven Deadly Sins, Super Sonico from Nitro Super Sonic, Harley Quinn from the Suicide Squad, Inori Yuzuriha from Guilty Crown, and much much more. Her serious expressions and the way she poses for the character are what her thousands of fans love most. 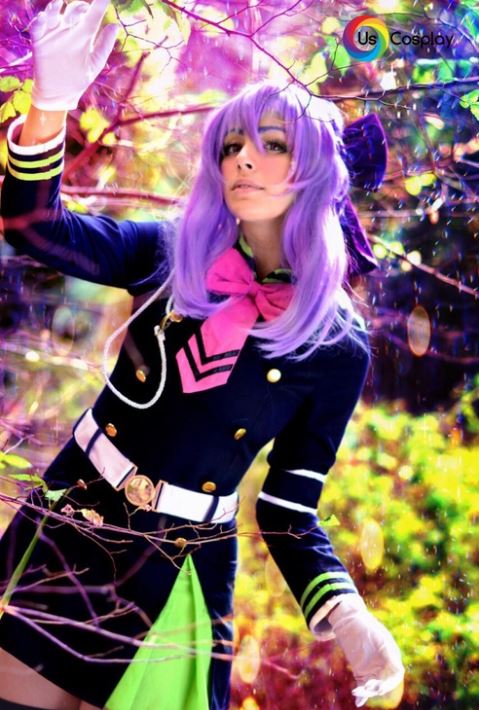 Us Cosplay – 20 Best Shinoa Hiiragi Cosplay From Owari no Seraph

Milky Cello is one of the most popular cosplayers in the Cosplay Community. She has more than four thousand followers on her social media handle. She has given life to many different 2D characters with her cute and adorable face and extraordinary skills in makeup. In the past, other than Shinoa Hiiragi, she also cosplayed Camelia and Hatsune Miku from the VOCALOID, Tepes Krul from the Seraph of the End, Amatsukaze from the Kantai Collection, and many more. The tint of the violet she has chosen for the Shinoa Hiiragi cosplay is more than perfect and beautiful. 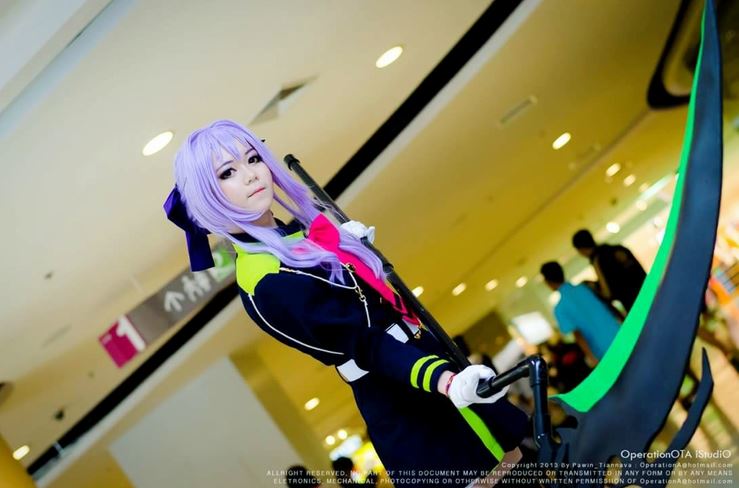 Carioko Go, along with her cosplay partners Misaki Sai and Clarissa Nash, has created one of the best cosplay trios someone can ever do with the characters of Seraph of the End like Yuichi Byakuya, Guren Ichinose, and of course, Shina Hirrragi. These three are the Ukrainian cosplay artist who, with the help of their mutual understanding and long-running friendship, always presented the characters with so many details and with more than perfection. Other than Shinoa Hiragi, her other cosplay like ChuChu from the Show By Rock, Claire from the Granado Espada, YoRHA No.9 Type S(9S) from the NieR： Automata, Willow from the Don’t Starve, are also worth mentioning. 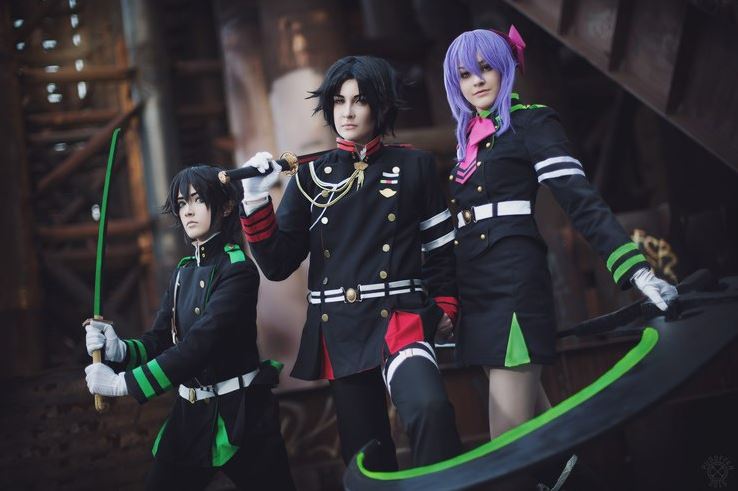 The South Korean artist, Buri, is one of the leading cosplay artists in her country. Buri, along with her other cosplay artist, including SPIN and Tuna, has recreated the legendary fight scene where all the strong characters get together to fight against the enemy. Where Shinoa Hiitagi was cosplayed by Buri, Yuichiro Byakuya was done by SPIN, and Mitsuba Sangu was cosplayed by another famous South Korean cosplay artist, TUNA. In addition to this, different well-known characters like Rem and Ram from Re: ZERO -Starting Life in Another World is also beautifully cosplayed by Buri. 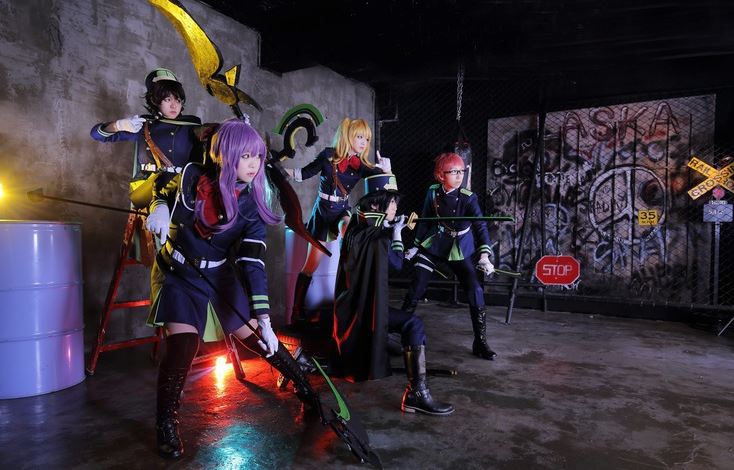 Shallu Lu is a Chinese Cosplay artist famous for her top-notch cinematic style of representation and realistic photography. Shallu Lu, unlike most other cosplay artists, always tries to implement the 2D character into a real-world scenario. In addition to the Shinoa Hiiragi, Lulu has also tried to reincarnate different anime characters like Urashima Kotestu from Touken Ranbu, Alisha Diohda from the Tales of Zestiria, Nakigutsune from the Touken Ranbu, and many more. 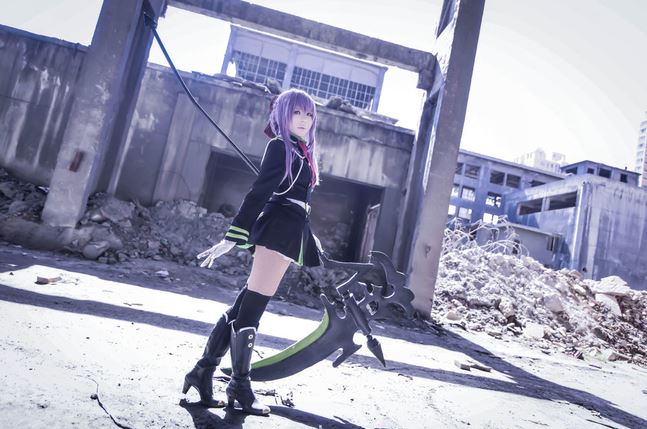 Chiisai Saku is a German cosplay artist. With her unique style, she is quite famous in the cosplay community. One of the best things about her is that she completely transforms into the character and every time deviates a new aura with her cosplay. In addition to the Shinoa Hiiragi, you can also find her in different other characters like Sakura Haruno from Naruto, Eren Yeager from Attack on Titans, and a lot more. 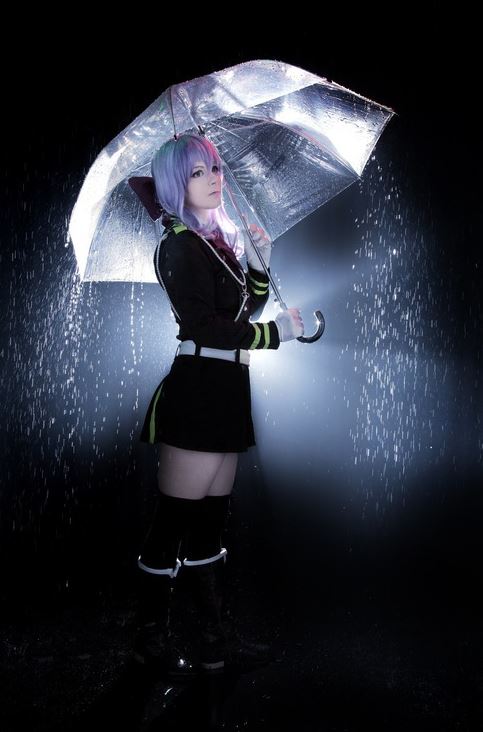 Mai Fam is an Australian cosplay artist who has more than five thousand followers on her Instagram profile. According to her, the most important part of her cosplay is her smile, and she always tries to showcase a serious face behind a cute little smile. In addition to the Shinoa Hiiragi cosplay, Mai also has gained recognization from a number of fans with various other cosplays like Megurine Luka from Just Be Friends, Rin Hoshizoray, You Watanabe, Dia Kurasawa, Misa Amane from Death Note and many others. 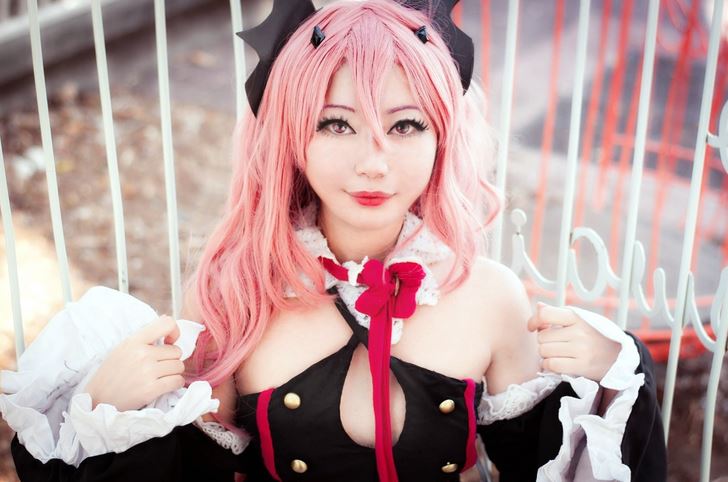 Se Chan is among the top cosplay artist in Germany. Along with her Shinoa Hiiragi cosplay, her Nobara from Jujutsu Kaisen, Nami from Oe Piece, Rem for Re: Zero, and Jinx from League of Legends are also worth mentioning here. To see more cosplays from her, you can check her Instagram. 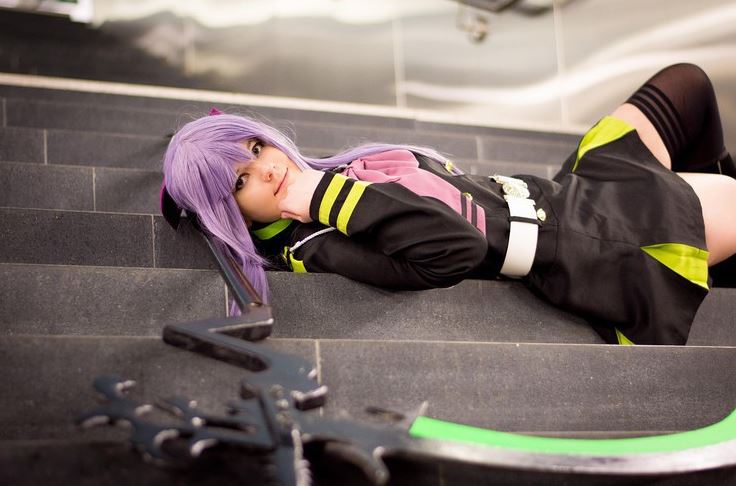 Aurora Rain is famous for implementing a slight touch of neon effects in her every cosplay. She is a famous cosplay artist from Taiwan and has more than ten thousand followers on her Instagram account. Unlike most of the other cosplay artists, in Rain’s cosplay, different VFX lefts her fans speechless. 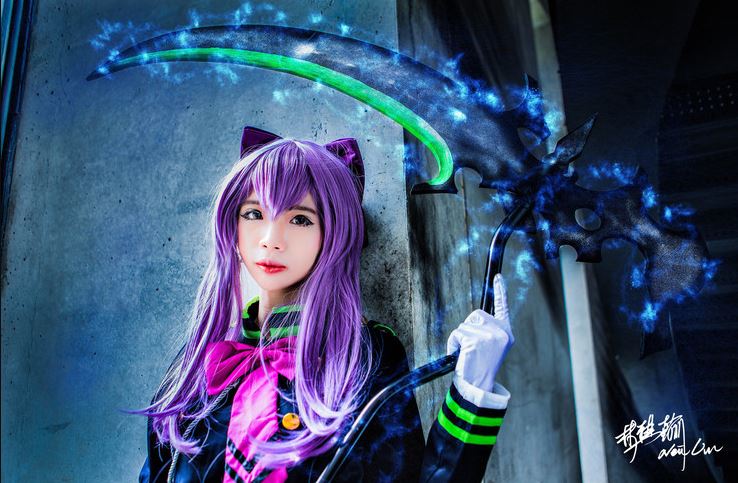 Mitsukae Alice is a cosplay artist from Thailand. She has more than two thousand followers on her social media handle. 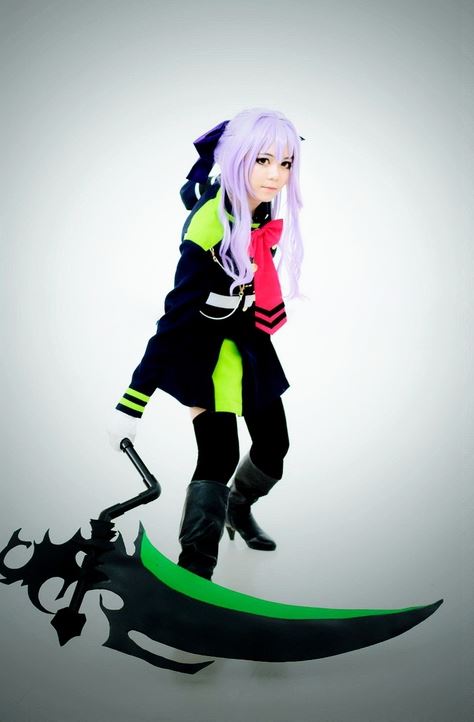 A Viet Nam cosplay artist, Zanier is broadly known for her cute and adorable costumes and makeup. In addition to the Shinoa Hiirahi, you can also find other kawaii cosplays of her, like Sona from League of Legends, Rin Hoshizora from Love Live School Idol Project, and many more, on her official Facebook account. 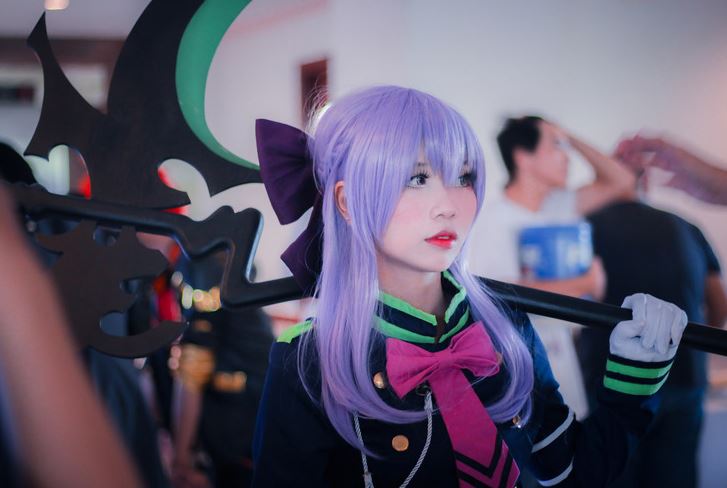 Jubi is a famous South Korean cosplay artist. Although she has been inactive for a couple of years, her former cosplays are still among the best cosplays. 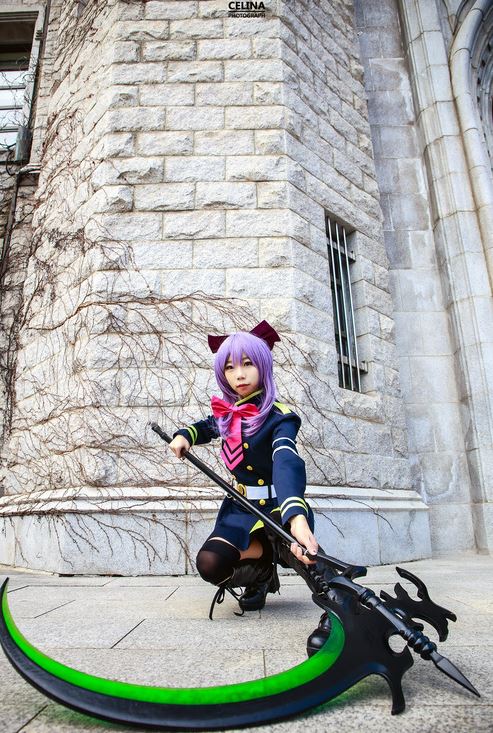 A cosplay artist from Japan, Chisaki is best known for her perfection. Different cosplays by her are stunning and mouth-dropping; you can feel every element of her cosplay real and more than accurate. 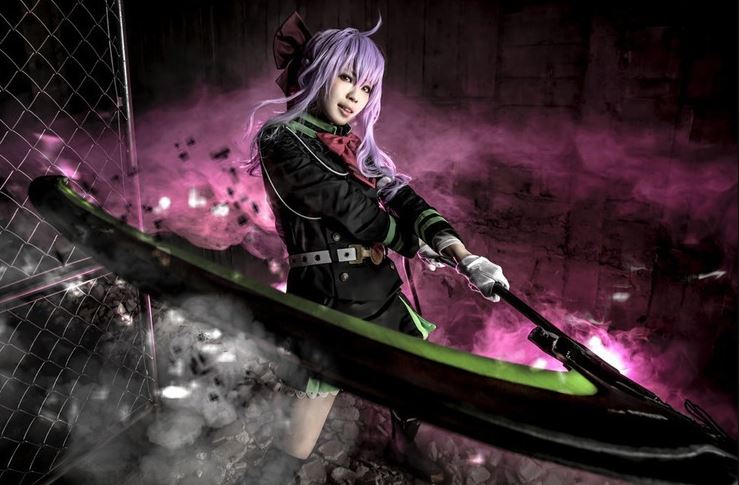 Kaoru is a Singaporean cosplay artist and has more than five thousand followers on Instagram. In addition to the Shinoa Hiiragi, she also did Saya Takagi from Highschool of the Dead, Lunafreya Nox Fleuret from Final Fantasy XV, and many more. 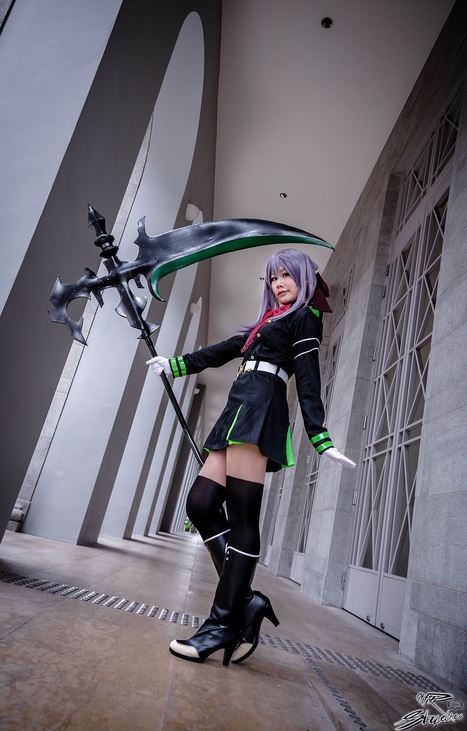 Iriyama Akame is one of the most popular cosplay artists from Malaysia. Although she is new in the cosplay community, along with her other cosplayer friends, she beautifully did a cosplay remake of the Livestock Vs. Vampire, from the Seraph of the End. YoRefa Kuryuu as Yuichiro Byakuya, Kazuhyun as Mikaera Hayakuya, Akira Yuuji as Shinya Hiragi, and Iriyami as Shinoa Hiirahi were the main elements of the cosplay remake. 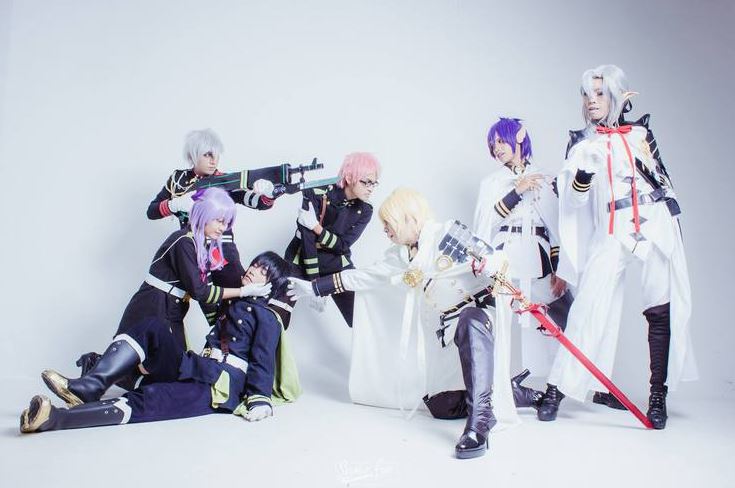 Kairu Yato is a new Malaysian cosplay artist and public figure. In her cosplays, she is quite adorable and cute. Although she is new, she is growing her skills in the field day by day. 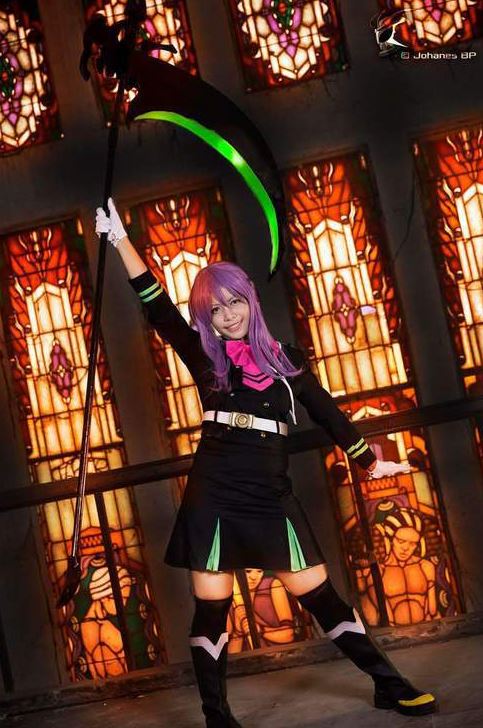 DD Tenka is the first male cosplayer on our list. He is originally from China and is currently living in Singapore. Although he is most famous for Chinese cosplay, he also does some stunning anime cosplays as well. His cosplay of Shinoa Hiiragi, along with Angie and Samuya, left the world speechless. His other work includes Violet Evergarden, Hajime Mutsuki from Tsukiuta, and YoRHA No.9 Type S(9S) from NieR： Automata, with some stunning graphics and photography skills. 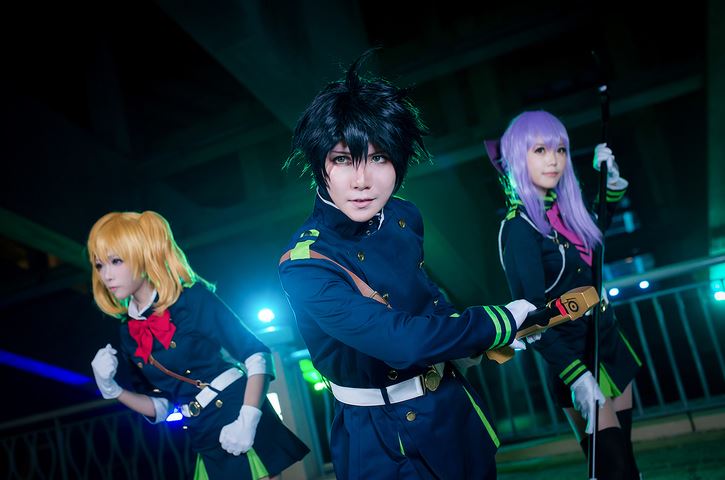 Rachel is a Japanese cosplay artist who has more than a thousand followers on his social media account. Rachel, along with his partners, recreated the signature pose of each and every member of the Japanese Imperial Demon Army. In this cosplay, Ruu did the Mitsuba Sangu, Mippi did the Tepes Krul, Shinya Hiragi was done by Qua, and Shihou Kimizuki was done by Chrno. He also did Kirito and Kirigaya Kazuto from Sword Art Online in the past. 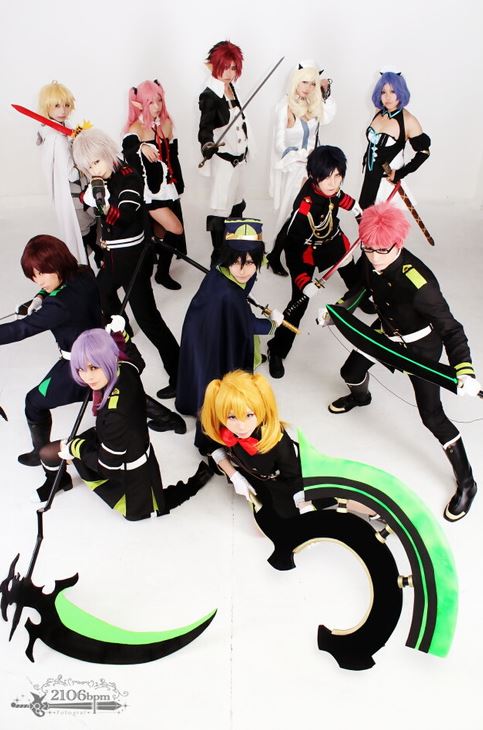 Khanh Chi, a cosplay artist from Viet Nam along with Rui Mango, did excellent work by cosplaying the best duo of  Owari no Seraph, Hiragi Shinoa, and Sanguu Mitsuba. You can feel the synergy between our favorite characters just by seeing their stunning cosplay. 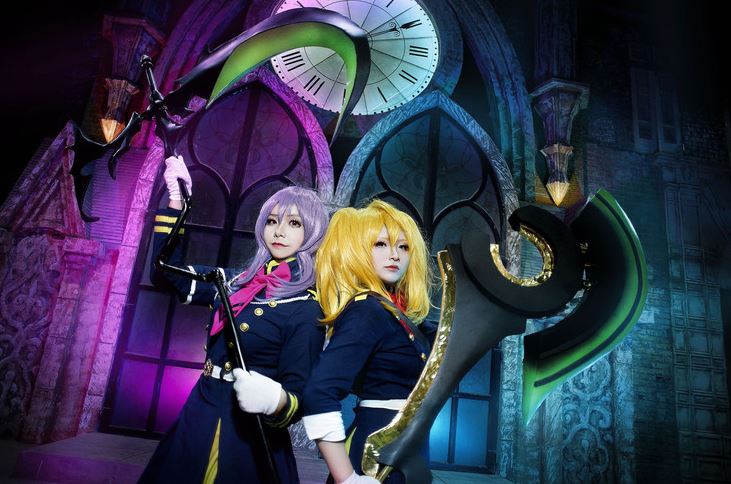 ALSO READ: Top 13 Johan Liebert Cosplays That Are Out Of This World!